You have permission to edit this article.
Edit
Home
News
Schools
Things To Do
Real Estate
Essex FAQ
Classifieds
Letters to the Editor
Business Directory
Obituaries
About Us
1 of 2

EWSD Superintendent Beth Cobb pointed out that there was a savings of over $4 million between fiscal years 18-21 as noted in this updated slide, using information from the district's FY21 Annual Meeting presentation.

This article was written by Jen Lannom, a student at the University of Vermont and a reporter for the Community News Service, a student powered partnership with local community newspapers.

Despite fears that the merger of Essex, Essex Junction and Westford into one school district would unfairly allocate taxes, interviews and student success metrics show a unified district eases communication among schools, reduces overall spending and benefits students academically.

In 2017, the merger formed the Essex Westford School District. Students in these areas had long shared Essex High School as their primary high school, but the existence of multiple districts meant K-8 education was not consistent for all students.

The merger was the first of its kind in Vermont, with a main goal of reducing spending, according to a 2015 Burlington Free Press article. The proposition claimed that over a five-year period, $1 million may be saved by the district, largely through the consolidation of central office workers, according to district data.

Opponents of the merger cited that eliminating staff would only account for about half of the savings. The remainder of the money would be saved by removing school choice from those in Westford.

“Today the parents of 40% of Westford’s high school students choose, for a variety of reasons, to send their high school students to Mt. Mansfield and BFA Fairfax high schools,” Art Woolf, a former professor of economics at UVM for 39 years, wrote in 2015 as the merger was considered. “The consolidated school district would save the tuition money that is now spent at those other schools.”

Woolf, like other critics, claimed these other high schools may face a burden as they lose the tuition of this influx of students.

Since the merger, Woolf, a Westford resident of 37 years, has not grown any fonder of the idea. He cites the loss of school choice as the main reason for the district's economic success, as the towns no longer must pay tuition for students who want to attend other schools.

“The question is, are there other economic effects and that's particular to the towns,” Woolf said in a recent interview. “There's evidence in the economics literature, for example, that people are willing to pay a premium for a house in a town with school choice,

“So to the extent that in my town, for example, in Westford consolidation, eliminated school choice, which meant that your house was essentially worthless after consolidation.”

Woolf believes the state of Vermont may end up consolidating schools, rather than districts, as it becomes more necessary for the state to save funds.

“The problem is there's not enough money in the administrative budget of the state of Vermont, in terms of schools, education budget, to make any difference in reducing overall costs,” he said.

“It's kind of like a husband and wife who both have kind of normal jobs. And they're each driving a really expensive Mercedes Benz that costs them $600 a month for each car for a lease. And they're struggling to pay their leases and their mortgage and all their other costs. They really like the Mercedes. And they say, oh, let's have an idea. I know how we can save money, let's carpool. And we can save $30 a month. The problem with their budget is not the fact that they're not carpooling. The problem is they're driving cars that are way too expensive for their family.”

“It was also an opportunity to really start the process of vertical teaming across all of the schools that eventually fed into the high school."

Many students seem unphased by the existence of the merger, saying it hasn't affected affected their day to day schooling on a noticeable significant level.

Zoe Sheppard, a member of the EHS class of 2017, graduated right as the merger took place. While she doesn’t hold a strong opinion on the merger, she said she has heard vaguely of the conflict it may have caused.

“I think the community was somewhat split, but more people were leaning in favor of the merger,” Sheppard said. “Honestly, I can’t really remember. I asked my mom what she thought, and she said that she supported it and pooling resources makes sense. Our schools should be on the same page when our students funnel into the same high school. Vermont has too many supervisory unions and it’s a huge waste of money.”

Matt Wosky began school at EHS in 2017, just as the merger commenced. He has noticed little community response to the merger and doesn’t feel he has been largely affected by it either.

“My thoughts are impartial; if anything it’s probably a good thing to include more kids,” Wosky said. “But it really doesn’t seem like an issue for my position or for other kid’s positions. My parents feel the same way about it as me.”

Several other districts in Vermont would follow and merge similarly, with the Essex Westford district offering a playbook on how to do it quickly and efficiently, according to the Free Press article.

Linda Cloutier-Namdar, named the 2018 Vermont teacher of the year, has been at Essex High School since 2007. Cloutier-Namdar sees the strength of the merger in the added communication between districts.

“It was also an opportunity to really start the process of vertical teaming across all of the schools that eventually fed into the high school,” Cloutier-Namdar said.

Vertical teaming is the practice of establishing a team of different grade-level teachers in an academic area to communicate, cooperate, design curricular change and create support structures to encourage high achievement by all students, according to the Educator’s Voice textbook.

Cloutier-Namdar said the merger has allowed the district to take what’s working in each school and share that information with the larger district.

“I think in the long run, the idea is to really look at what each district is doing on the K-8 level and try to take the best of both of those districts and building something even better,” she said.

Cloutier-Namdar also said the combination of the teaching unions from the separate districts into one union representing all of the EWSD, allowed for greater communication among staff.

As a member of the union and someone who attends the executive board hearings, Cloutier-Namdar said the combination of both unions allowed for the best ideas in both to be shared.

“For example, the Essex educators union had a scholarship fund that they work to distribute for summer scholarships for students,” she said. “So we really have kind of taken that, that’s been absorbed into the new merged union. So even on that level, at a district-level certainly and administrative offices, but also at the union level. And so there are some real positives there."

Additionally, the spreading of the tax burden over the three communities has made education taxes less volatile, according to studies conducted by the district. Westford, which had been struggling to keep its local schools open, was propped up by the other districts as the merger commenced.

Essex, Essex Junction and Westford held similar education property tax rates with one another for about a decade, according to public record, meaning citizens likely did not notice a significant difference in taxing following the merger.

While it is still early to recognize the academic effects of the merger, some statistics are looking up for the EWSD: the percentage of students going onto college.

Since the merger, a variety of factors could have influenced this shift: undeviating K-8 education setting students up for high school success, stronger union actions to improve the district, educational stability and the ability of the school to offer more AP courses. 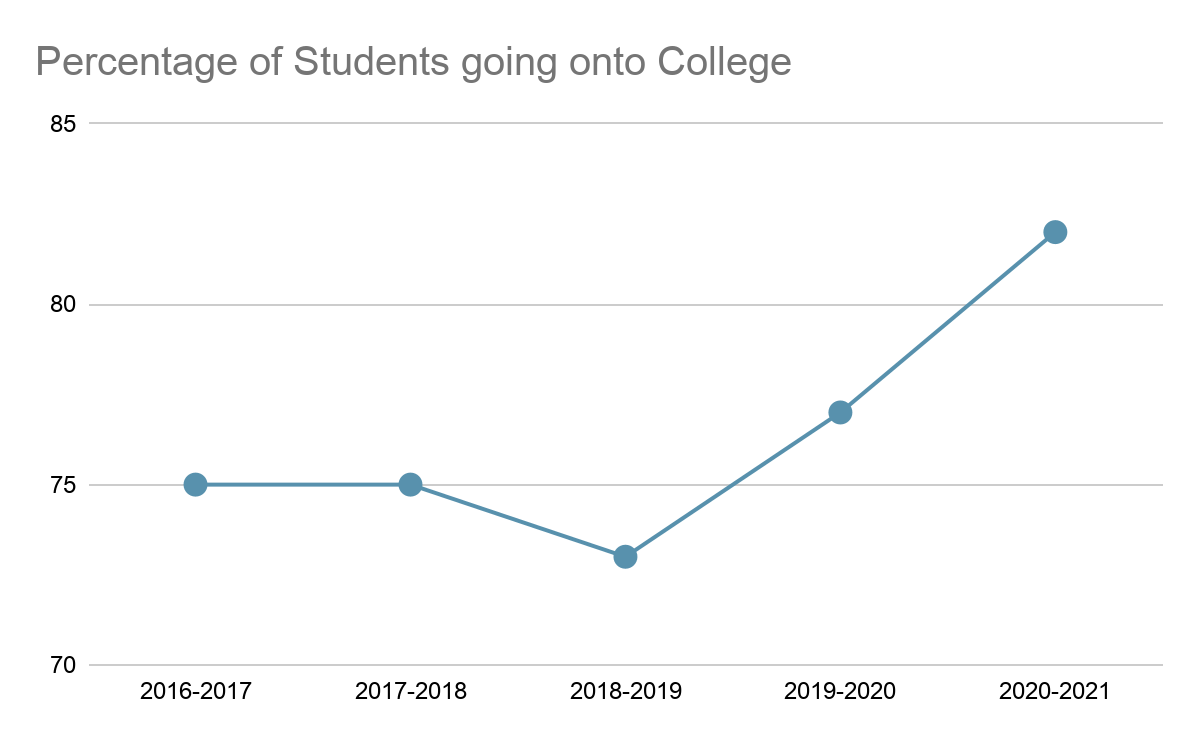 Welcome to the discussion.

Thank you for taking part in our commenting section. We want this platform to be a safe and inclusive community where you can freely share ideas and opinions. Comments that are racist, hateful, sexist or attack others won’t be allowed. Just keep it clean. Do these things or you could be banned:

• Don’t name-call and attack other commenters. If you’d be in hot water for saying it in public, then don’t say it here.

Let’s make this a platform that is educational, enjoyable and insightful.

Our Reporter Today newsletter will get you up to speed on news, events & more

Success! An email has been sent to with a link to confirm list signup.

Error! There was an error processing your request.

Success! An email has been sent to with a link to confirm list signup.

Error! There was an error processing your request.

We're always interested in hearing about news in our community. Let us know what's going on!

Famed Vermont musician Mike Gordon's stunning contemporary cabin in Essex is on the market for a cool $895,000

Seeing Vermont: Here are 14 photos of Island Pond, a census-designated place in the Town of Brighton

This stunning Halifax retreat awaits you and nine others